Skip to content
Posted on December 23, 2019 by The Overage Otaku

The Outsider is a useful narrative tool because people have to explain things to them. It’s really that simple.

Now the “explaining” can take many forms. There can be trial and error, where the outsider learns by mistake, usually with comic results. See Sadao from The Devil is a Part-Timer; in fact, all the entities from Ente-Isla do this.

There’s intuition. Tohru, Miss Kobayashi’s Dragon Maid, is certain enough of her superiority to humans that she doesn’t ask for help. She looks at humans and guesses at the principles that underlie their behavior, and since she recontextualizes everything in terms of her home world, she’s usually wrong.

And the character can be told how things work. This can be very dull at times, but allows the writer to explore the meaning of life, particularly in terms of conversation. Yes, even in an anime it’s possible for characters to talk to one another, and sometimes to say things that are thoughtful and profound.

Which brings us to Elias Ainsworth. The Ancient Magus’ Bride is one of those stories, manga and anime, that intends to be thoughtful and succeeds, to a certain value of success, and at the heart of it is the story of the Ancient Magus, Elias, and his child bride, Chise Hatori.

They are a complementary couple, each with strengths and weaknesses, although most of the strengths are Elias’ and most of the weaknesses Chise’s, but what is important is this: at the start they both have a sense of alienation from humanity. Chise is a sleigh beggy, a human with contact with the fae world, and this has driven her so far away from ordinary human life that she sells herself into slavery.

Elias, of course, is some kind of monster, the type of which no one knows. So far as anyone can tell, he is the only of his kind in this world. Just as he’s starting to seem human, they make him seem more monstrous by having him confess he’s eaten human flesh. No, he’s not a cannibal; he’s not human himself.

That makes him the ultimate Outsider, of course. He’s not only not from this world, he’s alone here and does not know who he is or where he comes from. (Although it is consistent with the kind heart of the series that he has made very good friends here). 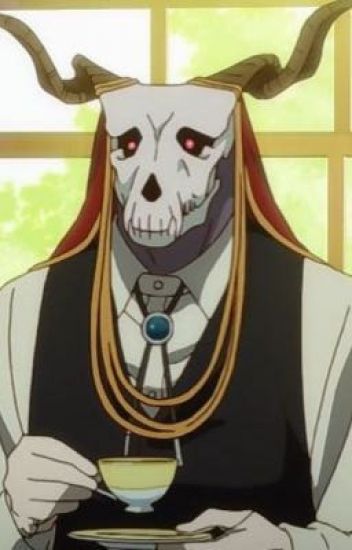 The contrast of Chise and Elias is important because as Chise grows into a place in the world she can call her own, she outgrows her alienation, grows toward being more human, to having friends and feelings.

And, being the Outsider, Elias does not understand Chise’s feelings. Boom. She has to explain them.

Dialog from the manga:

He also starts to recognize some of her feelings as being things he can recognize in himself. That’s part of the text here: As Chise discovers the humanity she is heir to, Elias grows to be more human. They are growing together, to being more alike, exactly like a married couple. I mean, it’s called The Ancient Magus’ Bride for a reason, right?

Bizarrely, marriage is exactly one of those human things Elias does not understand. He buys Chise because she is a sleigh beggy, frees her immediately, treats her as his child, and says they are to be married. Hence The Ancient Magus’ Bride.

It falls to eight-year-old Ethan, the brother of Chise’s friend Stella, to explain it to him:

More dialog from the manga:

Elias: I don’t think I grasp the concepts of “family” or “husband and wife” yet. Aren’t they simply a unit that lives together for an extended period of time, each aiding the other’s survival?
Ethan: Huh? That makes it sound like it doesn’t matter who they are! … I wanna see my mama and papa again. I wanna give them a big hug and then go play games with them. … Isn’t that what family is? Your family’s the people that make you feel that way.

Being a kid, Ethan has a kid’s-eye view of family, but he understands the human emotion at the heart of the word. Elias is hundreds of years old and he doesn’t understand it.

So, narratively, Ethan has to tell Elias about it, and in doing so tells the audience what the author is thinking. The Outsider is a character that lets the writer talk to the audience but without breaking the fourth wall; characters talk to The Outsider and through them, indirectly, the author talks to us.

That’s what The Outsider does. He makes people talk to him, and that lets the writer talk to us.

I'm an ex-industrial chemist, ex-TV engineer and ex-award winning animator currently masquerading as a practicing social scientist. I write science fiction and fantasy, and my first self-published book, The Yak Butter Diaries: A Long Day's Journey into Life, is available at Amazon. (You can read it for free on a Kindle Unlimited account and I still get paid.) It's also available at lulu.com in print.
%d bloggers like this: