Skip to content
Posted on December 16, 2019 by The Overage Otaku

As a writer I keep telling you about stories I have written when they drop. (There’s another one coming up soon!) But every once in a while I have to plug a buddy, too, because after all, we’re all in this together.

My buddy Lexy Wolfe (If you know what the word “Ticanee” means you’ll recognize that name) writes fantasy books. They’re pretty good. I’ll plop the blurb below. And guess what? 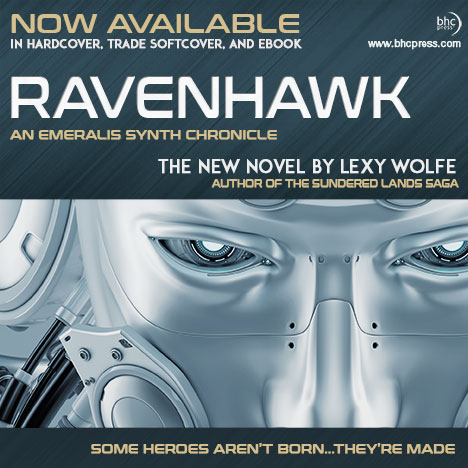 If you click on the picture, it MAY take you to the publisher’s page. I’m still a little shaky on this stuff despite minoring in Computer Science.

“Some heroes aren’t born…they’re made

“Why? The simple question asked by Ravenhawk, the creation of a corrupt corporation used to covertly infiltrate and steal data—or lives—at her creator’s orders resulted in the synth escaping their control. Unsure what her purpose for existence was, she nevertheless wielded her considerable combat abilities to cost those hunting her dearly.

“Viktor Chernovich, in desperate need of a webrunner to keep his reputation as a fixer from utter destruction, reaches out to the infamous “murder-bot” to hire her. With embedded technology so ubiquitous that lacking it is considered treasonous, Ravenhawk is perplexed confronting her first pure human. Together, they discover something even more terrible than the insidious corruption of the world governments by corporations.”

If you like the look or sound of Lexy’s book, have at it!