Skip to content
Posted on November 24, 2019 by The Overage Otaku

I’m posting a little early this week. It’s the last week of NaNoWriMo, my book’s plot is coming together, and I want to get in a couple scenes before I crash.

Okey dokey! I had already read the manga, so I started watching it that night. On the next day Jen had another panel just on Utena and I went to that, too.

But there was a key question I never found the nerve to ask.

For those of you unfamiliar, Utena Tenjou is a young woman who as a girl met a Prince who saves her, and so she vows to not just find her prince again, but to be a prince herself and save others. This requires her to dress as a prince. Yup, Utena’s a transvestite. Although I will add that while she wears a man’s uniform TOP, she wears it with hot pants (the actual men wear long trousers), so maybe not so much.

When she gets to school she finds an elaborate social structure that revolves around dueling. The prize for being top duelist is the Rose Bride, Anthy Himemiya. Utena wins her duel and so she now has a wife. Nothing symbolic there! I’ll add that the anime is more explicit than the manga. (I read the manga long before I got to watch the anime.) 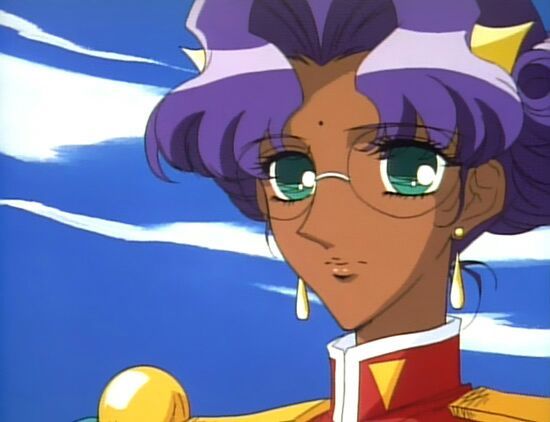 There are a couple ways that Anthy is an interesting character, and I’m sure other people have noticed them before. One is that she encompasses both sides of the “Madonna/Whore” dichotomy, the idea that certain women are to be venerated as our mothers or the mothers of our children, while the others are to be treated as mindless sex toys. Mario Puzo explains this at length in The Godfather (yes, there was a book before the movie).

As the Madonna she is a desired prize, beautiful, beautifully dressed, retiring of personality, lady-like in thought and deed, a goal to be aspired to. As to the Whore, well, this gets to be pretty explicit in some of the movies that followed the main series, in which it is made clear that Anthy, as the Rose Bride, is expected to perform what some call “wifely duties” for those who have won her, including her own brother at one point.

At the same time Anthy is also the Rose Bride and a Witch. The Rose Bride is perfect, all good, all passive. The Witch is active and nasty. Anthy plays some pretty mean tricks on some people. That’s an interesting dynamic as well. Some people say her trickery symbolizes her increasing freedom from the Rose Bride persona, in which case I can put up with her being a bit of the nasty.

These dichotomies make Anthy a very interesting character, particularly in contrast to Utena herself, who is trying to figure out whether she is a princess or a prince on her own by being one and playing the other. Utena’s interesting, too, and the two of them together make good characters to play against the machinations of the plot. Makes for a lot of explicit conflict, not all of which happens in the dueling court.

That’s not what bugs me about Anthy.

This is what bugs me about Anthy: she’s dark-skinned, a person of color. She and her brother are brown-faced, the only characters darker than pale pink in the series. Sort of like Brock in Pokemon.

And as the Rose Bride she’s treated as property. She belongs to the top duelist, period. This is not her choice; it’s what it means to be the Rose Bride.

Go back to the last paragraph. Take out the words “the Rose Bride” and substitute the words “a slave.”

Double that “yeah” when you recall her wifely duties. Do visions of Sally Hemmings* flash through your head?

Utena and Anthy are opposites in so many ways: Utena is mannish, tall, athletic – she can jam a basketball! – assertive, passionate; Anthy is feminine, short, (whatever the opposite of athletic is), passive, repressed. Since they are opposites in many ways, another way they may be opposites is in skin color. But we don’t know.

Also, Anthy has a caste mark on her forehead: I suspect we’re supposed to think she’s Indian (as from India). But she’s still the darkest member of the cast, her and Akio.

What I don’t know is whether it’s deliberate. Is it an accident or a statement about slavery? If it isn’t about slavery, why is she a woman of color? If it is, why are the Japanese making it? I mean, the Koreans and the Chinese and the Filipinos will be among the first to tell you that their experiences with the Japanese suggest that someone regarded themselves as racially superior to other people, at least back in the middle of the last century. (The Indians weren’t all that impressed with Japanese tolerance, either.)

So is Anthy supposed to remind us of slavery?

There’s something else I’m having problems figuring out.

In battle Anthy is the container of Sword of Dios. Part of this ties back to the Anthy as slave idea; when duels are fought, she places roses on the competitors, but then her current “owner” draws the Sword of Dios from her. This reduces her to an object, a scabbard, which reinforces for me her identity as an object, as property.

But watch the process: she leans back, eyes closed, back arched, as though in orgasm. The (long) sword is drawn from between her breasts, and regardless of the drawer, becomes an excellent phallic symbol.

Anthy is a sex toy, fucked by the Sword of Dios (not to mention whomever she’s “married” to when not dueling). Pardon my French, but there’s no better word. There’s no indication that any of the guys loves her. She’s a prize and treated as an object, a sex object in this case.

How Utena treats Anthy is a separate question. It is very clear that, except when she needs the sword, she regards Anthy as a person, not a thing, and wishes her to follow her own dreams instead of the dictates of the Rose Bride role. At points late in the series Anthy draws the sword from Utena using the identical sexual imagery, so we are clearly to know they are lovers in the sexual, if not romantic, sense, and later on Utena becomes the vehicle of Anthy’s freedom, (literally so in Adolescence where Utena changes into a car(!!) driven by Anthy).

At the same time, though, when Utena needs the sword, Anthy lies back and thinks of England.

To me it keeps coming back to the one question that has to be answered, and that is this: Why is Anthy black? What is it supposed to mean that she is? Because if it’s deliberate, it’s a powerful, and nasty, statement.

The next time someone tells you anime is just cartoons and cartoons are for kids, introduce them to Anthy Himemiya.

I always look at comments and feedback, and I’m sure I’m not the first to see what I’ve seen, so have at it. Just keep it clean and keep it on target…no personal attacks, okay? Thanks.
* Those of you from outside the US may not be aware that several early American Presidents were slaveholders, and that one of them, Thomas Jefferson, had a number of children by his slave mistress, Sally Hemmings. This has been proven by DNA analysis, and I think it says a lot that in this day his descendants, white and black, all accept each other.

I'm an ex-industrial chemist, ex-TV engineer and ex-award winning animator currently masquerading as a practicing social scientist. I write science fiction and fantasy, and my first self-published book, The Yak Butter Diaries: A Long Day's Journey into Life, is available at Amazon. So is the compendium of posts from this blog, Samurai Storyteller. You can read them for free on a Kindle Unlimited account and I still get paid, so do it. Dooo eeeet!
%d bloggers like this: