Some things I keep coming back to. This is one: the number of interrelationships among N characters is N(N-1)/2, so the complexity in number is basically exponential as the number of characters goes up.

Of course, another way for the complexity in character interrelationships to increase is to have the writers deliberately throw in a joker. Oh, those rat bastard writers!

Scum’s Wish is a basic non-love story. That’s not completely true by the end, but it describes about ten of the twelve episodes: it’s about four people, two adult and two in high school, trying to figure out how they all work out together.

At the start we have our high schoolers, cute little Hanabi and handsome Mugi. They’re always seen together, talking together as a couple and holding hands and such, so everyone KNOWS that they are a pair. Guys don’t even talk to Hanabi, and likewise gals and Mugi, because they’re so obviously together it’s obviously a waste of time. 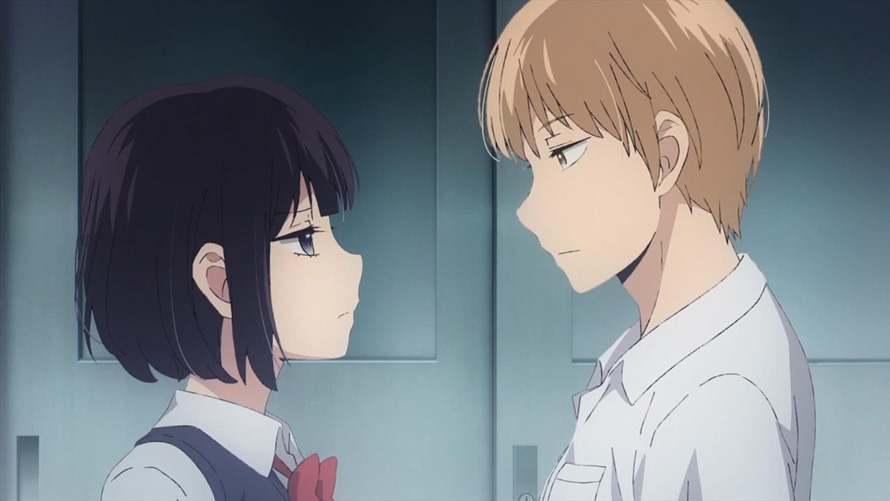 In truth Hanabi is crushing, and crushing hard, on her teacher, Narubi. Mugi doesn’t feel jealous or left out: his secret heart’s desire is HIS teacher, Akame. Hanabi and Mugi have made a deal that if they don’t get hooked up with their One True Loves by the end of the year, then the two of them will stay together. Until then they can’t fall in love with each other.

I’m not sure I can keep track of this stuff without charts, but here’s the chart at start:

Now this can resolve in a lot of ways but three are obvious: Neither kid scores and they hook up at the end, they both score (Yay for troo luv L-U-V!), or one of them does and the other doesn’t. Then they gots a problem. Any of those, though, is WAY too easy and isn’t going to drive a twelve episode series. This plot is worth about four episodes, and to a US audience the answer is obvious: 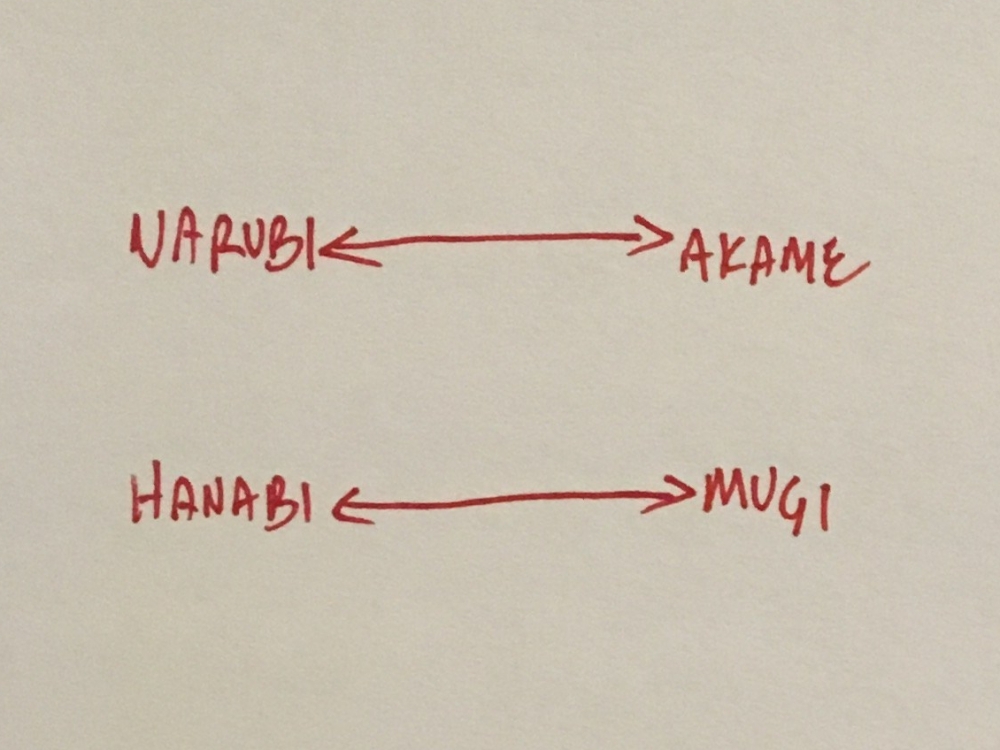 Now the rat bastard writers throw in the monkey wrench that makes the overall plot work: Akame possesses two important character traits: 1) she is a really nasty, almost sadistic person and 2) she is a nymphomaniac.

The two patterns above are pretty stable, but what Akame does is completely destabilize the whole situation. She has sex with Hanabi, confusing poor Hanabi who is essentially straight. Akame has sex with Mugi and then tells Hanabi about it (and for a moment fulfilling Mugi’s fantasy). And of course she goes after Narubi, Hanabi’s crush…and she tells Hanabi about that, too.

Akame’s actions put her in charge of the dynamic:

She comes to completely dominate the social relationships among the four of them, which sort of makes sense as she is not only a nasty person, she is also an assertive person. Akame sees what she wants and goes to get it, and what she wants is sex and lots of it.

Now, since Hanabi is the central character, not Akame, to get the story back on Hanabi the writers gave her a friend, Sanae, the lesbian. Hanabi really likes Sanae and wants to be her friend; Sanae really likes Hanabi and wants to be her lover. Now that leads to sufficient tension between them to drive the action forward two more episodes. Oh, and at the same time Mugi hooks up with Noriko, which doesn’t do much except maintain the symmetry between Mugi and Hanabi (he can’t complain she’s sleeping around if he is, too).

So now we’re at

Thinking with his pants instead of his head, Narubi proposes to Akame. She tells him to his face that she WILL cheat on him with a capital W-I-L-L. No bones about it. She wants sex and if she wants to have sex with someone, she’s going for it.

He says, “Okay,” which is actually a move I like a lot. I’ll tell you why when I’m done plotting the relationships.

By about episode eleven Hanabi has figured out that she’s not sure exactly what she wants – I mean, by then she’s been with two women, Akame and Sanae, and two men, Mugi and a minor character (male), Takuya, who she uses to try (badly) to make Akame jealous – And she comes to realize is that what she really wants is to find herself, to find someone she genuinely loves and not just be in a relationship just to be in a relationship. Just as she’s starting to regress on her resolve (because a cute classmate is hitting on her) Sanae rescues her and Hanabi goes on alone.

Oh, and Narubi and Akame get married. So we end up at:

Now that was a little unexpected. Someone did a really good job of saying, “Okay, how can we avoid the obvious solution?” And it works: It’s hard to root for Akame – even at the wedding she’s taunting Hanabi – and Mugi sort of disappears, but Narubi is a good chap and you want to tell Hanabi “You go, girl!”

Moreover, leaving the futures of Hanabi and Mugi up in the air leaves the story unresolved in an appropriate way. They’re just kids! Why should their lives be set already? The adults are paired up, and the kids have their lives to look forward to, a future that could hold anything. It’s an appropriate unresolution.

Now Scum’s Wish is problematic in a lot of ways. A lot of the lovemaking scenes with Hanabi are borderline rapey. Takuya takes “No” for an answer when she says he’s hurting her, but in some of the other scenes she’s crying and clearly not giving positive consent. The pairing of Akame’s sexual desires and her toxic personality suggests an association of the two in the minds of the writers (She is a “BAD GIRL” and “Bad girls DO THAT”) and, of course, in the States having sex with two of her students would get her fired, if not imprisoned for several decades. I mean, there’s some seriously nasty stuff going on in here.

But I appreciate the way they make a clear distinction between love and sex. Love is love: Narubi is willing to accept Akame’s nymphomania (and her flat declaration that she will cheat on him) because he loves her. To him the fact that she is having sex with someone does not mean she loves that person; certainly she feels that way as well. She wants SEX, not love. If sex with other men is what makes her happy, he accepts it, because he genuinely loves her and wants her to be happy.

And Hanabi is discovering that while she can have sex with anyone, male or female, she doesn’t actually love any of them. In fact, the person she seems to LIKE best, Sanae, is someone she DOESN’T want to have sex with.

Contrast that to any number of movies and anime where the characters show they love one another by instantly jumping into the sack with each other. I’m looking at YOU, Amalie!

I also appreciate how they’ve tried to be fair to the high schoolers. They’re KIDS: they aren’t really sure yet what love is or what sex means, on top of which they have raging hormones. Hanabi and Mugi are CONFUSED. They think they’re trying to do what they are supposed to do, but they aren’t sure at all that they are getting it right…and that’s what it means to be a teenager.

Won’t watch it again, but it was neat to see once.

4 thoughts on “The Power of Two Times Two: Scum’s Wish”