Skip to content
Posted on July 29, 2019 by The Overage Otaku

I write about Cowboy Bebop a lot. That’s not accident. It’s stunning to look at, routinely makes people who watch it look at cartoons generally and anime specifically in a new way. It’s literally groundbreaking.

Also, a lot of people have seen it. If your perspective on anime and manga is the one I’m taking, approaching the topics from the standpoints of being a writer and a trained animator, it helps to work with material everyone has seen. I can take all the examples I want from…Geez, I don’t know…What something no one’s seen? Coppelion…I’m told the anime was a stinker although I thought the manga was pretty good…I could draw examples from Coppelion if I had seen it but then people would say stuff like, “What chu talkin about?” because no one’s seen it.

To me as an animator Bebop is brilliant. Shinichiro Watanabe is a terrific director with great vision and the will to make everything he touches look great. (You can see it in all of his series; even as goofy as Space Dandy is, it LOOKS great.) You pair Watanabe’s vision up with Yoko Kanno’s musical score and the show, all twenty-six episodes of it, is a visual and aural treat.

I want to say this again. I love Cowboy Bebop. Do not take what follows as me “trashing” a classic series.

Atza hard thing to do.

Some really good things happened in Bebop when they were figuring out who the characters were and how they interacted. Did you notice that Faye never turns into a love interest for the guys? Yes, she comes to love Spike but they are never even remotely a couple. I’m sure you’ve seen that…Can you imagine how hard that must have been for writers to do? Faye is a great character, a woman as strong as any of the men. Plus she’s not just hot, she’s HAWT! But she is never the Princess in Peril trope nor does she play the Girlfriend role. If she was all lovey-dovey smoochy-smoochy, she wouldn’t be Faye Valentine.

Spike and Jet are a classic tragic hero/sidekick pair, tinged with the Japanese ronin (wandering samurai) trope. But they avoid the trap of making Jet a comic sidekick (most of the time); he’s the sidekick because Spike has the stronger personality, that’s all.

Has there been another character like Ed? She’s completely innovative so far as I can see. She’s a kid but she’s also autonomous; no one in the Bebop parents Ed. She’s her own person.

Then Ein. Ein, to be fair, doesn’t do a lot. He’s really the comic sidekick, alas.

Here’s the problem the writers faced: They have what is billed as an ensemble cast. All five characters appear in the open, for instance; their names all show up on the same page in the opening credits. We call them the “Bebop crew,” as a collective. 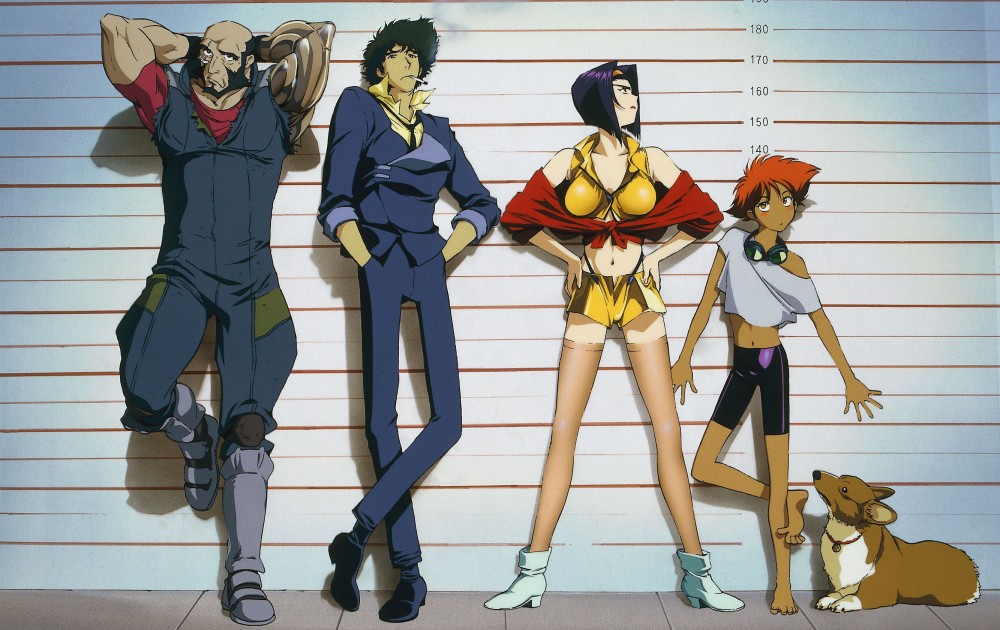 But the story is about Spike. This is clear in a couple ways:

> His story is integrated into the story line, as in episode five, where he first confronts Vicious, leading to that marvelous sequence of him falling in slow motion. Dear god, where did Watanabe pull that one from? The animator in me drools, literally drools, watching it.

None of the other characters gets a scene like that.

Right…the end of a story is where the conflict is resolved. Spike fights Vicious alone, the fight ends and the series ends. It’s Spike’s internal conflict that drives the meta-plot.

You see the same thing in Samurai Champloo, by the way: There’s Mugen and there’s Jin, but the show ends when Fuu finds the samurai who smells of sunflowers.

To deal with Cowboy Bebop really being The Spike Spiegel Show, a bunch of other things follow:

The backstories of the others are just episodes in the series, digressions. They don’t advance the meta-plot. This is clearest in Ein’s case: yes, he’s a data dog…but WHY? What is Ein supposed to do?

But similarly we get an episode about how Jet lost his arm. There’s a little more of Faye’s backstory involved, her amnesia and poverty, and where she came from, but that comes mostly as the end of the series is in sight so we know it’s never going to be resolved. Ed’s backstory is so neglected that we only see it in her last episode.

I think one of the problems they had was that they tried so hard to stay away from stereotypes that they weren’t sure where they could go. I’ve mentioned the Mind-Body-Soul trope before and in Bebop they clearly avoided that. But in the absence of character tropes, where could they go? Outside of Spike, I don’t think they figured it out.

For me, the most wasted character is Ed.

I just said it but I’ll say it again. There’s never been a character like Ed. There have been a zillion child geniuses – Jim Hawkins, anyone? – but unlike them Ed’s head is so far in the clouds that it’s impossible to know what she’s doing or why. Ever notice that? All the other child geniuses are strongly grounded and sensible. Not Ed. She’s a nut! She’s even drawn in a different, older style (we call it “rubber hose” animation) that contrasts with the sheer realistic grit of the rest of the series.

But she doesn’t really DO anything. Yeah, she hacks the computer a couple times, and that one episode where she’s off in search of mushrooms is cute (Ein stoned off his ass!), but it’s basically filler. Ed plays no role at all in the meta-plot; she just acts like the free-range child she is most of the time. She neither grows nor changes.

Neither does Jet, but he’s a sidekick.

We see Faye’s hard edges soften some toward the end, but again, it’s toward the end. The show explores her past but not her future; there’s no time left for Faye to go anywhere.

So, from the standpoint of writing, four-fifths of the characters are underused, and that bothers me.

Incidentally, from this standpoint the movie (Knocking on Heaven’s Door) does a better job of using the characters than the series. In the movie they all get something to do, even Ed (and, typical of her, she screws it up). The only problem with the movie is that it’s clearly situated somewhere between episodes 9 and 24 of the series, and regardless of how the plot of the movie plays out, there’s always an underlying sense of “We know how this story ends.” And that’s because we know how this story ends, in a fight between Vicious and Spike.

Full points for trying to create unique, well-rounded characters. Minus five for not figuring out how to use them fully.

8 thoughts on “What Are All These Characters Doing Here: Cowboy Bebop”