With Neon Genesis Evangelion (and the two follow-up OVAs that tried to turn the ending coherent) dropping on Netflix, a bunch of us have the chance to go back and look at it again.

I make no bones about the fact that up until now I have based my analyses of the story and characters on the manga, which are readily available (and excellent, by the way). Of course, with the wily wisdom of a born marketer, creator Hideaki Anno has said BOTH sources are canonical. So are the remake movies, the fourth and last of which is expected in 2020.

One thing that pops out at me immediately on watching the anime is that the main children are treated differently in the anime and the manga. In the manga Shinji is a lot more bearable. In the manga Rei is explored in greater depth. In the anime Asuka plays a larger and more powerful role.

This makes a lot of sense. The three of them form a classic Mind-Body-Soul trio of characters: Rei’s silence and stoicism suggests that she is intellectual; Asuka is bold, brash, violent; Shinji is overwhelmed by his emotions. And anime is a more active medium than manga. In an active medium it’s easier for an active character to stand out.

In the manga (and also the remake movies) one of the key subplots is the developing relationship between Rei and Shinji; I’ll write more about that someday but in a nutshell they start as rivals (for the attention of Gendo) and start to develop romantically. (This is really only hinted at in the anime, for instance, when Shinji watches her wring out a cloth and says that she wrings it like a mother. No, Shinji; she wrings it like YOUR mother.)

With that downplayed in the anime there’s room for Asuka to get more space in the center of the story. And I’m sure I don’t need to tell you that Asuka is one screwed up young woman! She’s arrogant, a bully, rude, controlling, and far more sexually aggressive than a woman her age should be. She’s an intellectual overachiever who none-the-less does poorly in school, and is not quite as good an EVA pilot as she thinks she is. 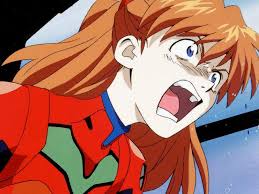 At the same time she’s not entirely unpleasant or off-putting, except at first, before we get to know her.

Once we do get to know her, we understand that what drives her character are two conundrums. Conundra? Whatever. There’s two of them and they are HUGE.

I’m not saying that’s a bad thing. That’s NORMAL for a fourteen year old. Shinji is, too. Kaworu, too. For that matter, you can check out some of the comments Toji makes about Misato (not to mention his halting relationship with Hikari). Frankly, that the high school kids are all hot for each other in various combinations, even Rei in her own way, is one of the few normal things about the show/series/franchise/whateveryouwanttocallit.

Asuka’s problem, and one of the tensions that underlies her character, is that she has no idea what to do about it.

Remember, she’s 14 and a genius, a college graduate. Wait, what? So when she was in college – How many of you remember college? Remember all the hooking up that went on? – she would have been totally off limits. Any college student laying a finger on her would be expelled instantly for statutory rape. If her intelligence wasn’t off-putting to her classmates, and a woman that smart is intimidating to a lot of guys, her age was. There used to be a saying, “Fifteen will get you twenty.” What will twelve get you?

So now she’s hitting puberty and along with being brilliant she’s also HAWT. So how and with whom is she going to hook up?

Ohmigawd, I may have just inspired a thousand Rei/Asuka ships. Please don’t go there.

We know she wants Ryoji Kaji, but that’s not going to happen. Student/pupil? Nope. Not at fourteen. When she tries to seduce him (I think that’s only in the manga), he passes. It’s gentle, but it’s a hard pass.

Plus to the extent he’s interested in anyone specific, it’s Misato. Right. The woman – an actual woman twenty-nine years old – Asuka lives with, so when Ryoji is hitting on Misato, Asuka is watching and going through the roof.

So she tries playing with Shinji and play it is since neither of them knows what they are doing. They kiss. She insults him and pushes him away. She locks herself in the closet so he can’t come near her and then creeps into his bed in the middle of the night. She sees him making goo goo eyes at Rei and butts in, trying to mark him as her territory, then screams “Baka Shinji” to drive him away.

You all know that, right? We’ve already talked about her school years. She never met or had a father since she was fathered by a sperm donor. (Which is another reason she’s so possessive of Ryoji.) (Ew. Symbolic incest.)

And her mother killed herself. Asuka found the body.

That’s the ultimate rejection. Her mother told her she wasn’t worth living for.

Traumatized? Oh, hell, all three of the children are traumatized. Rei’s a clone raised by scientists. Shinji goes from a quiet country life straight into the seat of an EVA; he’s PTSD to the eyes.

Instead, so far as Asuka is concerned, she’s been rejected by the only person she really had in her life. She doesn’t know how to act around the other kids. She pushes people away with the arrogance she adopts. She does not seem to be religious. Kaji dies in the course of the series. Who else is in her life? I mean, living in NERV she doesn’t even have a postman to seduce.

The ONE thing, the SINGLE ONE thing she has is being a great EVA pilot. But she’s not as good as Shinji, whose Mom is buried in the EVA’s operating system. She’s not as good as Rei, who was built for it AND whose genetic mom is Yui Ikari (and buried in the operating system). Can you imagine how she handles learning that she’s not the best? You’ve seen it. You know how she handles it.

So when the Angels get into her head, they know how to break her down. All they have to do is tell her she will never be loved. Because looking at it from her fourteen years of perspective, so far as her experiences up until then are concerned, it’s true. She has no friends. She has no allies. She has no lovers. She has no parents. Who will love Asuka?

When she looks around, she sees no one, not even Asuka. No, she doesn’t even love herself. She can’t. She doesn’t know how.

In the manga, there’s a lovely moment in the last chapter, which is an epilog to the end of the story as it’s shown in the End of Evangelion OVA. Rei has recreated the world and young Shinji is on his way to Tokyo, not to join NERV, but to go to school in a normal, angel-free world. And in the subway he bumps into a beautiful red-headed girl his own age. She’s having trouble getting out of the crowded car; he takes her hand and leads her out.

And he looks at her. “Have we met somewhere before?”

“Ugh! Let go! Are you hitting on me because I’m cute?” Pure Asuka.

a. hits him with a rolled up newspaper
b. loses her mind
c. yells, “Baka Shinji”
d. kicks him in the *ahem* groin

She wanted the cute guy to like her. And she can only want him to like her if she likes herself first. Thank you for fixing Asuka, Rei.