Skip to content
Posted on March 11, 2019 by The Overage Otaku

Did you like Cells at Work? I liked Cells at Work, and I have very low tolerance for cute. And I know a lot of you liked it as well; I decided to watch it because of the things a bunch of you wrote about it.

Okay, well by now I hope you guys know my thang. This isn’t going to be a review; I’m going to put my writer’s brain on and take the show apart to see if we can figure out why it worked so well.

There are a number of factors that go into making a good anime. Some of them – music, for instance – are things I have nothing constructive to say about. Cells is only available in a subtitled version, and since my Japanese is somewhere south of rudimentary, I really can’t evaluate the acting.

So how about them story elements?

How about plot, meta-plot, character, and length? Those are the things I typically end up talking about. Also, a new idea: A show needs some kind of underlying concept. Sometimes that’s subsumed by the genre (think “Slice of Life”) but sometimes it’s some sort of storytelling hook.

Which would you like to start with? Hello (hello) (hello)? Is anyone out there? I can hear you breathing…Okay, I can wait here until someone says something. Oh, forget it, I’ll roll my D&D dice.

The plot of every episode, or the plot arc in the case of the one two-parter, is always Overcoming the Monster. Right? It’s disease of the week, House without that annoying guy with the cane.

Overcoming the Monster is a simple plot that has conflict built right into it: You have hero and you have monster. Monster must be fought and vanquished. Boom. Conflict. That simple. It’s sure fire. The only way it fails is if the hero is too strong or the monster too weak. And since Cells at Work is based on biology and, biologically speaking, the monster has a chance to win, that unbalance is automatically avoided. Simple and easy. Not profound – I don’t think anyone ever said Cells was profound – but it works.

The overarching meta-plot that ties the series together is…are you ready for this one? I bet you never saw it coming…Overcoming the Monster. Right? What’s the underlying story? It’s Red Blood Cell’s desire to overcome her inability to navigate the circulatory system! That’s a Monster, of sorts, and is the source of a lot of the action in the series. I didn’t count, but how many times did Red Blood Cell run into the Monster of the Week because she was lost?

They could have gone for some kind of romance between Red Blood Cell and White Blood Cell, but I think that would have excessively personified them. They’re CELLS. They don’t do stuff like get married!

But once again the Overcoming the Monster leads to inherent tension across the series. Unlike the plot monsters that show up every episode, though, Red’s journey is comic, and being comic it lightens up the grimmer and more gruesome elements. I mean, the series seems fairly accurate biologically, but I can tell you that germ cells do not gush red blood over everything when they get attacked by white blood cells. White Blood Cell is often covered in gore; in comparison, Red’s conflicts lighten the mood constantly, so that we always have a tension between drama and comedy. Nice choice!

Character: Okay, we have our main characters, Red and White, and a reasonable number of supporting characters. As their roles in the body differ, so, too, do the personalities they are given. 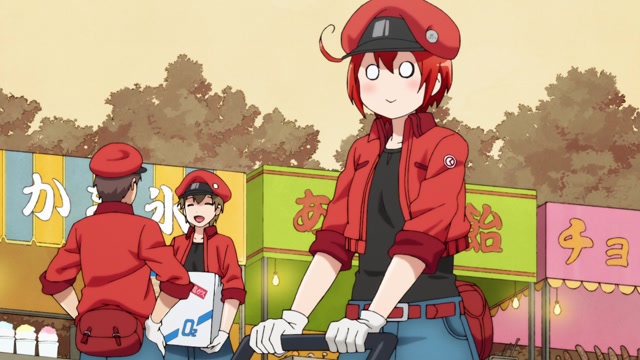 Our Female Main Character, Red Blood Cell, is about as moe as moe can get. She’s cute and determined, eager to do well in her job of carrying oxygen to cells and taking away their waste Carbon Dioxide. This determination is at odds with her actual competence, which is compromised by her lack of a sense of direction. (There you go, another source of creative tension.) She frightens easily and is frequently a Princess in Peril, another standard trope whose inherent sexism we can overlook here because she’s just a cell, not an actual woman. But as a Princess in Peril she often needs rescuing, creating opportunities for Our Hero…

Here he comes to save the day: White Blood Cell

White Blood Cell. He’s strong, he’s bulky, he’s handsome, he’s got the knife, he kills the bad guys (er, germs). Oh, and he rescues the Princess in Peril. Yup, that’s a hero. The story line includes that he has some sort of protective feeling toward Red Blood Cell that goes back to when they were immature cells in “school.” This gives their relationship romantic and/or familial overtones, gives it a little depth that jazzes up the story without taking it over or getting in the way. 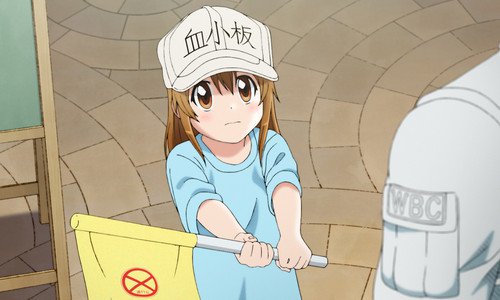 Oh, how cuuuuute! A platelet

Who else do we care about? The platelets. Oh, man, aren’t they so cute you just can’t stand it? Them kids is walking diabetes, they’re so sweet. They aren’t really comic relief, but they do provide emotional relief, not only because they are cute but also because of their workmanlike behavior: fights are going on all around them and they just plug away at their important little jobs.

This series could have run anywhere from about four or five episodes, long enough for us to get to like Red Blood Cell and enjoy her learning to tell her way around (that’s the meta-plot, after all), to, in principle, hundreds of episodes. How many diseases is humanity subject to? Right? Any of them could be an episode or two of Cells at Work.

This reminded me of Magical Shopping Arcade Abenobashi, which was built around a simple cybernetic loop: Does Sasshi want to go home? IF no, THEN have another episode. By definition, a series like that is always the right length so long as someone has the sense to call it off before it gets boring. Cells at Work doesn’t have an “IF…THEN…” structure, but it has the same sort of limitation: If we do this too long, the audience will get bored.

I see that the manga got into unusual stuff like dengue fever. Does that sound like something important to or interesting in your life? Yeah, as long as I stay away from mosquito country, that’s not something I can relate to.

And so, we’ve cooked up a series with attractive characters that have inherent tension and a plot and meta-plot that generate sufficient conflict to drive episodes and the series to a reasonable end. All we need now is something to set this apart from, oh, I don’t know, Magical Shopping Arcade Abenobashi.

MSAA’s narrative “hook” was that the episodes were written in different genres. You could tune in once a week asking yourself, “What kind of story are we going to see today?”

Cells at Work’s hook is wonderful, so far as I’m concerned. Ready?

Who watches anime for education?

Well, you know, it worked. They just told us how the cells worked, and then got back to the story.

The actual educational content of Cells at Work fills less than ten minutes, I would guess, of the entire series, but it leaves the viewer with the virtuous feeling of having learned something. Is that unusual or what?

There’s nothing here you haven’t seen before. The plot is simple, and the characters are tropes, but as a whole it works, doesn’t it? I liked it a lot. What that shows us that if you cook something out of some basic ingredients you can make something that’s really good and attractive. Get it? Cells at Work is the anime equivalent of apple pie.

11 thoughts on “Let’s Cook a Series: Cells at Work”