Skip to content
Posted on September 14, 2018 by The Overage Otaku

Last week I was talking about anime I won’t be talking about in this blog, and my friend Lina made the excellent point that it was sometimes useful to learn why someone doesn’t like something. Fair point. In fact, a pretty good one.

Now, among the anime I won’t be talking about are a bunch that I liked but that I think have nothing special to teach us. This doesn’t apply to them. I like them, okay, and maybe someday I’ll do a list similar to this where I’ll write a short paragraph on why I liked each.

There are other series I stop watching, for a technical reason that’s of no value to anyone since it’s a function of the way my stuff is set up. Basically, if a show is on the Internet, I have to watch it on my laptop, and since it’s a small laptop it’s on my lap. But that means I can’t do anything except watch the show. Not write. Not read. Not even skip between channels. That’s just too little stimulation for me, so it happens that I’ll just put something aside and go off to do something else. Gurren Lagann is one of these. I liked it, but I just stopped watching it because I needed the computer for something else. Wolf’s Rain…I think I have two episodes left.

But those really aren’t the topic here, either. This is about shows I stopped watching because I didn’t think they were worth my time.

Black Butler. I liked Sebastian. I thought he was cool and totally in control, and enjoyed watching until I learned that he is a demon, and then I was, “Well, pfft.” Narratively, if your character is a demon, by definition s/he has demonic powers, and that makes it too easy to solve anything. “How can he do that?” “Duh. He’s a demon.”

I had a similar response to Bungo Stray Dogs. I found it slightly more interesting in that each member of the crew had a specific power and so winning for them was a matter of finding the right combination of powers, but still. Supernatural. Powerz. Solve. All.

Basically, if I’m watching anything and a demon pops up, I’m outa there, following a major eye roll.

Deathnote: I thought this was briefly interesting, and I might still want to look at the moral implications of the question at the basis of it. I mean, if there was someone who was genuinely evil…Hitler, let’s say…and you had the power to stop him by murdering him from afar…I don’t think there are a lot of question there about the morality, and early on, at least, these are the sorts of persons written into the notes.

But Light, for good or for evil, is a serial killer, and when he starts to use his powers on people who are trying find him, he’s no longer in a moral gray area. After that, it’s just the question of who will get him and when he will be gotten. And I didn’t see a point in watching that play out.

Code Geass: I was not impressed with the first episode. I was just not engaged with it; to me it seemed rote and stiff.

This may be one of the two or three series I will be proven most wrong about. I was wrong about My Hero Academia…I stopped watching that one after two episodes, but then caught most of season one when it was stripped on Toonami, and it looked better than I thought it was going to be. (The story changes direction drastically when All Might gives Izuku a quirk.) I’m told that Code Geass gains momentum after the first episode (as the speaker pointed out, if you judge Cowboy Bebob by its first episode, you miss a whole lot of what makes it great), so I may come back to Code Geass. 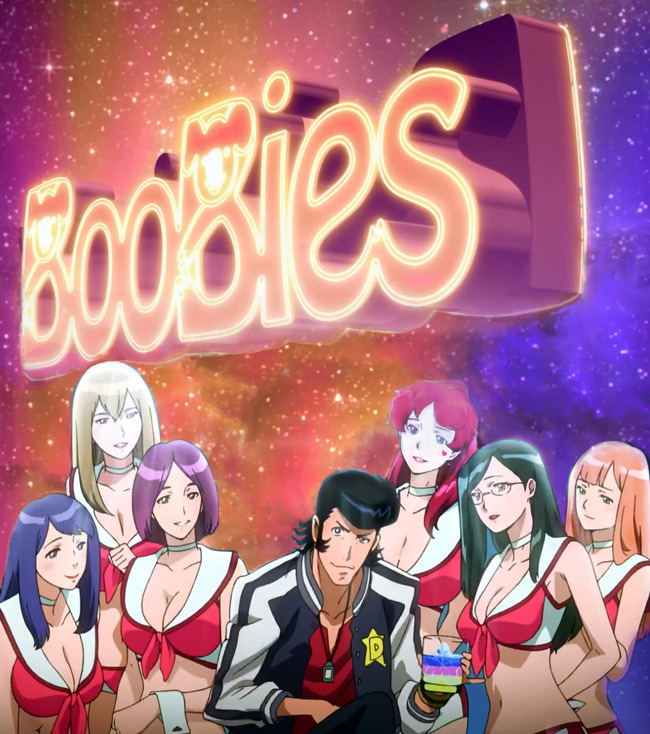 Space Dandy. If you’re going to do boobies, do them right, with, you know, character and plot and stuff like that.

There’s another series, something about girls playing a game that involves knocking each other out with their boobs and butts, that falls into this class. I gave it two episodes, saw it wasn’t going to be anything else, and dumped it. What was it called again? Oh, yes, Keijo!!!!!!! (Yes seven exclamation points.) Dumb. Stopped watching.

Sekano (How to Raise a Boring Girlfriend): So undistinguished I cannot remember a single frame of it. All I have is my little list of anime to watch with its name crossed off and the notation “Too stupid.”

Black Clover: The “hero,” Asta, was so totally over the top that I couldn’t stand him and couldn’t stand watching him. Now there might be a lesson there: One of the functions of the beginning of a narrative is to engage the consumer. If your hero is a jackass, that might be difficult.

Girls und Panzer: I’ve studied some military history, and the tanks in this show are really cool. Once you get past that, though, the meta-plot – technically it’s Overcoming the Monster – is just inane. Wow, they’re going to close down the school if the tank team doesn’t win. Reminds me too much of the jockocracy that dominates American universities. (I did mention I’m a university professor in America, yes?) Plus, while the panzers look right, their performance and tactics are unrelated to reality, despite the fact that the leading lady is supposed to be some sort of tactical genius. Stopped watching about half-way through.

Snow White with the Red Hair: This or Code Geass is probably the best series I tried to watch but lost interest in, and I think I lost interest in it because the meta-plot was just something I just didn’t care about. It looked well-made and well-written, but so far as I could see it was a story about two guys chasing the same gal. That it was told from her perspective was novel but not too interesting. I was much more interested in Kino’s Journey: Like Snow she’s a strong female lead, but Kino exists to explore the world, not to be a battleground. Snow White is pretty good, but it’s just not for me.

One-Punch Man: Up there with Snow and Code Geass, there’s One-Punch Man. It’s witty in places and subversive of the superhero genre: other superheroes want to fight and need to find the means to defeat their enemies, while Saitama has the means and needs to find the motivation. But ultimately that’s the plot of every episode … Saitama doesn’t want to bother, he’s convinced otherwise, punch. Some of the reasoning gets fairly philosophical, but it’s not exactly deep stuff, so after a while my feeling was “If you seen one, you’ve seen them all.”

There are others. Crunchyroll had a contest where to enter you had to watch the first episode of each show in their new season. The Ancient Magus’ Bride was in there, and Kino’s Journey, and I loved them both; but also in there was Dies Irae, and Black Clover, and … I don’t remember. I didn’t connect with more than Magus and Kino and maybe one other.

But ultimately that’s one of the really exciting things about anime. It covers all sort of genres, some standard, some unique unto itself. It has all sorts of characters and stories. If you don’t like this one, MOVE ON! There’s plenty out there for everyone.

By the way, if I dissed your favorite show, I’m sorry. But to each their own, as they say.

5 thoughts on “Follow-Up: Stopped Watching These”