Skip to content
Posted on March 12, 2018 by The Overage Otaku

Now, when we’re talking about the overarching plot of a series we’re really talking about meta-plot, but it’s still the same list.

By this definition Spice and Wolf is a comedy, sorta kinda…to the extent that boy (Lawrence, a.k.a. Spice) gets girl (Holo, a.k.a. Wolf). Except that, if you haven’t seen it, Holo is a hundreds years old fertility goddess and she needs a boyfriend about as much as she needs a size 000 thimble.

No, she doesn’t do sewing. Why do you ask?

I’ll avoid spoilers, but the essential story is that a traveling merchant (Lawrence, called Spice because salt is one of his prime products) reaches a small town just as they are having their harvest festival. When he departs the next day, he finds a stowaway in his wagon. Yep, you know who it is. Holo has been the village’s fertility goddess for centuries, but they don’t need her any more. 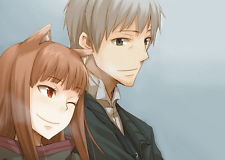 Oh, and by the way, Holo can manifest as either a gigantic wolf, one about fifteen feet high and forty long, or as a very beautiful young woman whose long hair serves as a (barely) sufficient source of modesty. (In the anime, I should say. The manga is sold in a cellophane wrapper so minors can’t see what a spectacular human specimen Holo is. Go figure. But the pictures are pretty.)

The strength of the anime is the growth of the relationship between the two. Lawrence is a clever trader, a man who understands the hard life based on “Buy low, sell high,” And Holo, well, she calls herself “wise” on numerous occasions and for the most part she’s absolutely right; then there are the times where she doesn’t quite understand humanity. That combination of their skills means there’s not a lot of tension in the plot. Between Spice and Wolf they can outsmart anyone.

For me, the reason to watch Spice and Wolf, and I’ve already watched it twice, is not the plot but the relationship between Lawrence and Holo. He’s fairly modest; she’s bold. When he starts to think of her as little more than a pretty girl, she reminds him that she’s a goddess hundreds of years old. And the sex…

Well, who knows? It’s pretty clear that she wants him…There’s a thing lupines do, where they get down on their forepaws with their buttocks in the air, that’s the wolf equivalent of “Do me, big boy, right now.” Presenting, its called. Holo does that a number of times, without any indication that Lawrence has a clue. But she’s clearly hot for his bod, so who knows what’s up off screen?

What’s neat about Spice and Wolf the anime, as opposed to the characters, is the production. Someone put a lot of thought into the color palette, and as a result the visuals are always pleasing, with lots of earth tones. The animation is well above average, although it has the distinctive dark outlines that suggest xerography (about which, more at the bottom). The music is pretty, and based on the mandolin. It’s easy to listen to and easy to watch.

Spice and Wolf looks and sounds so pretty, it doesn’t matter to me what the plot is. The characters are interesting on their own, with Lawrence teasing Holo frequently, and she surprising him with the acuity of both her senses and her intellect; they are becoming friends, if not lovers, and learning to understand one another before our eyes, and it’s charming to watch.

In the face of that, who needs a plot? It’s luscious to look at, easy to hear, based on charming characters. There’s enough plot to get them though twenty-four episodes, and that’s all that’s needed. Spice and Wolf is like narrative Musak: you put it on and admire the pretty pictures, and enjoy the characters. Not great storytelling by any means, but enormously pleasant to watch. Like I said, I’ve watched it twice and I’ll watch it again, and even on the third viewing I won’t care what the plot is.

It’s like watching a good, well-made rom-com. Yes, there has to be something of a plot, to drive the story to the end. But the real story is Boy Meets Girl, Boy Loses Girl, Boy Gets Girl, and what we care about is not the story but the characters, and the hope they end up together.

* Xerography is an animation technique where, instead of having clean-up artists “clean up” the work of the lead animators (animators typically work in pencil and the clean-up artists trace the work onto cels in ink), the art is shot directly onto cels by using a special copier. The technique is characterized by the characters having heavy outlines, exactly what you see in Spice and Wolf.

2 thoughts on “No Plot Needed: Spice and Wolf”